As we look forward to the best destinations we'd wish to go on holiday in 2021, we're researching spring getaways with optimism. The UK is going through its vaccine program over the next months, and improvements in testing are slashing quarantine requirements. So could April be the perfect of all worlds? Summer comes early to short-haul island escapes in southern Europe; spring skiing keeps snow bunnies swooshing in the Alps, and there are many sunny city breaks you can get to by oh-so-eco-friendly train. It’s also the right time of year to follow and watch some bona fide bucket-list natural wonders – found everywhere from South America to southern Africa. Moreover, cherry blossom season isn’t just in the pink in Japan. Simply put: there’s a holiday for you, regardless of your jam. For inspiration, see our guide to the perfect places to visit in April along with our recommendations on the way to make your trip as sustainable as possible. 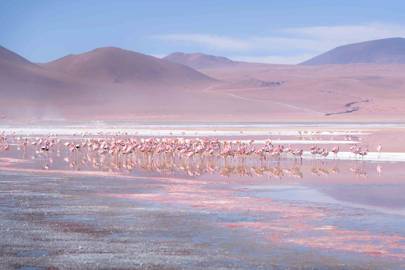 The end of the rainy season in Bolivia, April marks its wonderful time on its famous salt flats. The weather makes 4x4 touring manageable again. However, the bright-white plains stay partly submerged in water, turning them into a gorgeous mirror. A rough-and-ready four-day tour is memorable, passing smoking volcanoes, a flamingo-flecked red lagoon, and deserts scattered with Dali-esque ‘rock trees’ on the way. After, scrub up in its newly awesome capital, La Paz. Gustu was founded by Noma’s Claus Meyer, it serves riffs on local dishes (think: llama tartare). For a nightcap, try craft cocktails blended with native firewaters at design lodge Atix, a glass parallelogram with floor-to-ceiling views of surrounding Andean slopes.

Sustainable travel tip: Gustu isn’t just a La Paz’s hottest restaurant. The kitchen is staffed by graduates of Meyer’s Melting Pot cooking schools, which mentor students in a few of Bolivia’s most deprived areas. Eating right here not only helps the regional food system but creates better jobs for locals too. 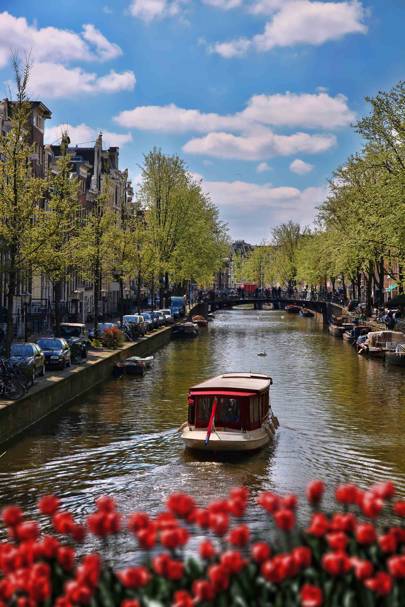 Amsterdam turns orange on April 27. It's King’s Day that brings a brightly-attired military of partygoers to the city’s streets, parks, and boats bobbing about the canals. This is the Dutch in their good-time prime. It’s also peak season for tulips, with massive patchworks of vibrant flowers blooming all around. It takes you 30 minutes to drive to Keukenhof, one of the world’s largest flower gardens, for rainbow-hued displays. And as one of Europe’s must-stay places, Amsterdam isn’t short on fabulous design hotels (The Hoxton Amsterdam and Soho House Amsterdam), Instagrammable brunches (we like Little Collins’ potato waffles and kimchi Bloody Marys), or farm-to-table cuisine (more accurately nursery-to-table at De Kas, inside a greenhouse).

Sustainable travel tip: Hurrah for Eurostar! From this April you'll be able to take a direct train from Amsterdam to London St Pancras, in addition to the other way. Those coming into the UK previously had to change at Brussels. Start running with two services a day, the train lands you canalside in just over four hours (zippier than the plane once you factor in travel to and from the airport). Less of an Italian Disneyland than Florence, Venice, or Rome, Naples is the actual deal. Street art includes 18th-century buildings and public housing alike. Along slender, cobbled lanes, small, family-run workshops turn out the likes of beautiful leather gloves. Piazzas around each corner called for a Spritz stop; pizzas are made following strict regulations (dough have to be no more than 3mm thick). Between museums housing Caravaggios and a trio of castles, there are tons of people watching on its lengthy seafront promenade, Lungomare. Do all of them in mild-tempered April, just right before the blistering summer sets in.

Sustainable travel tip: You can take the train to Naples and treat yourself to a bonus city break (or two) en route. Follow the Eurostar from London to Paris with the high-speed TGV to Milan (eight hours) or Turin (five hours 40 minutes), before venturing on to Naples (five or six hours). It’s the place to be seen in April. And even if you’re an over trust-fund baby strutting around in denim underwear and apache headdresses, the lineup often makes it one of the best festivals in the world. In typically eclectic type, Frank Ocean, Ariana Grande, Rage Against The Machine, Thom Yorke, Lana Del Rey, Charli XCX, Calvin Harris, and Carly Rae Jepsen are all slated for 2020. One more reason to show up, of course, is tacking on a bit of jaunt to retro party playground Palm Springs. Take part in the pool thing at Ace Hotel and Swim Club. Then enjoy mid-century modern design Eden at the historic Sunnylands estate.

Sustainable travel tip: Music festivals don’t tend to be essentially the most sustainable option to spend a weekend, however, Coachella has come up with a couple of ways to reduce your footprint: a recycling store that offers numerous rewards for empty bottles and cans; a power playground were taking part in on a see-saw, um, helps power a phone-charging station; and prizes for carpoolers. 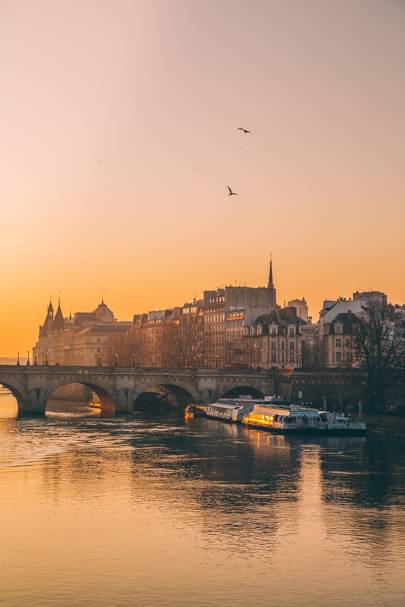 Who does not love Paris in the springtime? Or come to visit it at any time of year. Paris is all the time a good idea, Audrey Hepburn said. However, you can visit now, when the city is warming up and the trees around the Tuileries are in blossom. When we can be a part of the young Parisians who come out blinking into the spring sunshine, shrugging off their good coats to bare a new-season Breton stripe, sit out beside the Canal Saint-Martin and smoke Gauloises, or stroll along, golden-evening stroll along the Seine, hand in hand with someone else who loves Paris within the springtime. Here is our choice of best things to do in Paris, France, by day and the perfect things to do in Paris at night.

Sustainable travel tip: Take the Eurostar, of course, however, don’t stop there: there’s little more romantic than cycling around Paris in the spring, and, like most major cities now, it has a useful bike-sharing scheme (you can’t miss the bright-green Vélib’ stations).

7 Things You Should Experience While Traveling!

WHAT ARE YOU LOOKING FOR?

VIEW WISHLIST
Your wishlist is empty.

This is an approximate conversion table to help you find your size. If you're still considering between 2 sizes, choose the upper one.

Do you want to add products to your personal account?

YES
NO
Someone purched a

10 minutes ago from London, Great Britain
Someone purched a

We should be in [City] - Basic T-shirt

11 minutes ago from Amsterdam, Netherlands
Someone purched a

We should be in [city] - Basic Long Sleeve

12 minutes ago from Berlin, Germany
Someone purched a

13 minutes ago from Rome, Italy
Someone purched a

We should be in [City] - Custom Active Hoodie

14 minutes ago from New York, USA
Someone purched a

Just pretend that we're in [city] - Fleece Blanket | Made in USA

15 minutes ago from Moscow, Russian
Someone purched a

16 minutes ago from London, Great Britain
Someone purched a

17 minutes ago from Amsterdam, Netherlands
Someone purched a

18 minutes ago from Berlin, Germany
Someone purched a

19 minutes ago from Rome, Italy
Someone purched a

We should be in Paris - Active Crewneck Sweatshirt

20 minutes ago from New York, USA
Someone purched a

21 minutes ago from Moscow, Russian
Someone purched a

22 minutes ago from London, Great Britain
Someone purched a

You are my Person - Custom Mug | Made in USA/UK

23 minutes ago from Amsterdam, Netherlands
Someone purched a

24 minutes ago from Berlin, Germany
Someone purched a

25 minutes ago from Rome, Italy
Someone purched a

26 minutes ago from New York, USA
Someone purched a

Paris - Matte Canvas | Made in USA

27 minutes ago from Moscow, Russian
Someone purched a

Can't wait to use my Passport - Active T-shirt

28 minutes ago from London, Great Britain
Someone purched a

29 minutes ago from Amsterdam, Netherlands